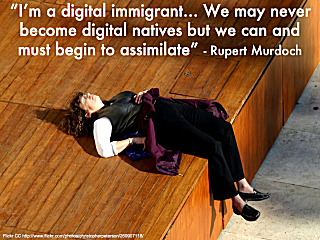 The notion of “Millennials” (Howe & Strauss, 2000), “digital natives” (Prensky, 2001), “net gen” (Oblinger, 2005), “technological generation” (Monereo, 2004) and Frand’s (2000) ten attributes of the “information-age mindset” is of great interest to me. Why? Well, my institution was awarded, this year, with some HEA Pathfinder funding to equip some of our lecturers with the necessary skills sets and tools that would enable them to speak the “new” digital language of our students.

Indeed, the aforementioned authors have identified a set of modus operandi that is common with a particular group of people that were born after 1982 (give or take a year or two). This M.O., as it were, includes such activities as: multitasking; visual literacy; highly social; constantly connected; a preference to using keyboards than pens / pencils; and a preference to reading on the screen rather than printed text.

A number of reports (Ipsos MORI 2007, Livingstone & Bober 2005) and commentators (Bayne & Ross 2007, Owen 2004) have put out warnings that this might not be the case – the presupposed M.O. just doesn’t fit. Delegates at this year’s ALT-C conference were cautioned that the so-called “digital native” student may not be overly familiar with Web 2.0 technologies like blogs, wikis and podcasting.

The flip-side to the “digital native” is the “digital immigrant” (more on that later). Both terms have been popularised and mythologised from Prensky’s (2001) original work and the basis of which have little or no substantive evidence or research to back-up his claims. McKenzie (2007) accuses Prensky of being “guilty of ‘arcade scholarship’“. Unfortunately, in the process of lambasting and unpicking Prensky’s ideas, theories and claims; McKenzie is also culpable of the same sense of “arcade scholarship” – which is a shame really as he does take Prensky to task.

Whilst I recognised that for many young people the Internet, mobile phones and MP3 players are very much a part of their everyday life and culture in the same way that television, radio and cassette players were with me in 1970s – so much so that it stops being technology and becomes normalised – it doesn’t necessarily follow that all students use technology or that they appreciate the use of “trendy” technology as part of their learning experience; despite what JISC (2007) may say.

According to Prensky (2001), “digital immigrants” represent the complete antithesis of the “digital natives“. Whilst some of the more “smarter immigrants” might be able to embrace technology and begin to speak the same language as the “digital natives“, albeit with an “accent“, most are not quite as forward-looking or thinking. It is these gross assumptions and the patronising manner that makes the whole “digital divide” debate / discourse distasteful and wholly unhelpful.

These metaphors alludes towards cyberspace as being some kind of untamed and untapped “Wild West Frontier” with the physical apparatus of pipes, cables, fibre-optics and microwave links being construed as a “digital railroad“. This kind of linguistic flimflammery are neither useful nor helpful culturally, ideologically, technologically or educationally; and do very little to help us to try and understand the true digital diversity (cyberdiversity?) of our hetereogeneous student body.

Bayne, S. and Ross, J., (2007). The “Digital Native” and “Digital Immigrant”: A Dangerous Opposition. Annual Conference of the Society for Research into Higher Education. December 2007.

JISC, (2007). In Their Own Words: Exploring the learner’s perspective on e-learning. JISC [online]. Available at: http://www.jisc.ac.uk/publications/publications/intheirownwords.aspx [Accessed 29 November 2007].