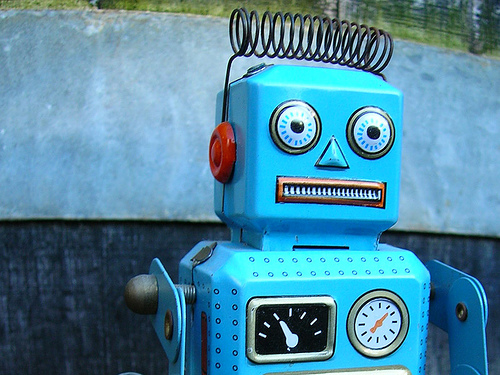 Any sufficiently advanced technology is indistinguishable from magic (Clarke, 1962, rev. 2000)

I am going to leave my impressions and reflections about the E-Learning and Digital Cultures MOOC until after the course has finished (but suffice to say I have been enormously impressed with it).

Block 1 of the course is an exploration of utopian and dystopian visions through the lens of digital culture and, to some extent, digital education and its’ impact on society and individuals. Week 1, entitled “Looking to the Past“, is an retrospective look at the historical contexts that, according to the course authors was to “seek to explain social, cultural or educational change in primarily technological terms“. Here, I was introduced to the concept of “technological determinism“, which I had heard of before but didn’t fully appreciate until I read Chandler’s (2002) excellent primer on it.

In addition to the readings, some of them are reproduced in the references section below for anyone wishing to follow them up, there were five short videos:

The first four films can be construed as “cautionary tales”, “fables” or even a “parable” (this, I think is certainly true of “Inbox“). Bendito Machine III is perhaps, by far, my favourite short video with its’ allegory to religious and mythic symbolism in the context of a “technological artifact” being handed down by some unseen god-like figure which is then worshipped and revered by the populace (think Kubrick’s “2001: A Space Odyssey“). Technological obsolescence ensues as each artifact is replaced by a “bigger, brighter, shinier” one, the old one is unceremoniously consigned to a scrapheap or pit where ecological and environment dangers (think Disney Pixar’s “WALL-E“), one would imagine, will eventually rear their ugly tentacles. But with each new artifact comes inherent dangers as the populace become seduced and then enslaved by each artifact, you might even suggest that theirs is a kind of “technological dependency” (parallels can be found in Channel 4’s “Black Mirror” anthology TV series) – I do draw short of using the word “addiction” here.

This is where the concept of technological determinism comes in. In short, it suggests “how far technology does or does not condition social change” (Chandler, 2002) leading towards a more technocentric perspective: “we shape our tools and thereafter they shape us” (Culkin, 1967, cited in Chandler, 2002). It seems that technological determinism tends to be focused upon causality, i.e. cause and effect, and that in turn it takes on a reductionist dimension which suggests that a theoretically complex concept can be explained away in a nice, neat compartmentalised fashion.

Critics of technological determinism argue that technology itself is “neutral” or “value free”, i.e. if is neither good or bad. Professor Ruth Finnegan, a sociologist specialising in communication, asks the following question of technology’s special place in culture and society:

This touches upon a “theory of complexity” (Dahlberg, 2004) which should consider such issues as “political control, class interests, economic pressures, geographical access, educational background and general attitudes” (Chandler, 2002). If you take the example of “fire” being one of the first technologies, it has a number of affordances (or properties) – it can be used for warmth, protection, cleansing, cooking and act as a source of light; but it can also be used to destroy and kill. Indeed, it is interesting to note that during the two World Wars of the latter half of the last century, there was an unprecedented technological push by both sides, on each occasion, to have the advantageous “edge” over the other.

So what of technology and education? Sir John Daniel, formerly the Vice-Chancellor of the UK Open University (1990-2001), an Assistant Director-General for Education at UNESCO, Paris (2001-2004) and the President and CEO for the Commonwealth of Learning (2004-2012), is quite bullish about the benefits that technology has for education:

The challenge is clear. The question is, can technology do anything about it? Can technology really increase access, improve quality and lower cost all at the same time. The evidence shows that it can. How does it do it? (Daniel, 2002)

Ten years later, Daniel offers us his “musing” on the MOOC phenomena (Daniel, 2012). At this stage, I would like reserve my comments and thoughts on the “promise” and “potential” of the MOOC until after the course has finished. There has been a lot to assimilate, both in terms on the content provided by the course tutors and the large course community created by the course participants.

One thought on “Week 1: Determinism, dependency and discrepancy? #edcmooc”