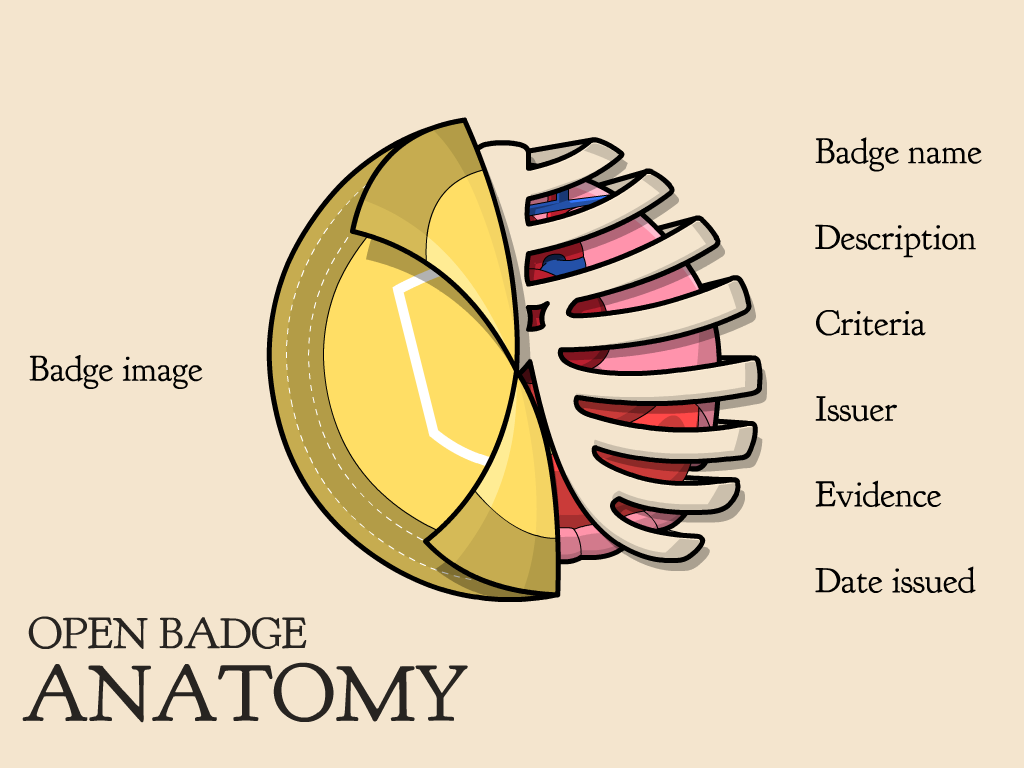 If you have ever been a boy scout or girl guide, you would have been awarded a badge to recognise your achievements in a skill, experience or deed. This would have been sewn proudly on your shirt or blouse for all to see. In formal education, you are awarded certificates that demonstrates your academic or vocational ability or achievements. These certificates are usually hung proudly on your office wall that tells someone that you are a recognised and qualified dentist or plumber. We also do a lot of informal education that isn’t recognised or accredited because it is usually something that we have to do or want to do. These informal activities tend to contribute to our ever-growing knowledgebase, experiences and skill sets, but are not formally acknowledged or recognised.

I have recently come across an initiative called “Open Badges” by the Mozilla Foundation. Essentially, “open badges” are “images with metadata hard-coded into them“. The metadata contains information around the acquisition of the badge such as the name and description of the badge (or achievement), details of the issuer (such as issue date, name of the issuer, the issuing organisation), and details of the recipient (so that the badge, or achievement, is properly attributed and awarded). For a good introduction to “open badges”, check out Dr. Doug Belshaw‘s slidedeck on SlideShare. Doug Belshaw, who is the Badges and Skills Lead at the Mozilla Foundation, offers a range of properties associated with the open badges (Belshaw, 2013):

I can see the providers of  the Massive Open Online Courses (MOOCs) like Coursera, edX, Udacity (from the USA) and OCTEL and OLDSMOOC (from the UK) making use of this initiative. Indeed, the OLDSMOOC provider is already awarding 9 open badges in total, based upon the Mozilla model. Similarly, JISC RSC Scotland have developed a series of courses around being a Digital Practitioner and Digital Innovator that will also be making use of  open badges scheme (Hamilton, 2013).

So what of degrees and diplomas? What of Higher Education? In the US, reports seem to suggest some advocacy towards the idea (Young, 2012; Udas, 2012). However, there are concerns over legitimacy, ‘style over substance’, governance, the commodification of learning, authentication, etc. In the UK, we have just introduced the Higher Education Achievement Report (HEAR) which:

provides a single comprehensive record of a learner’s achievement … enables institutions to provide a detailed picture of student achievement throughout a students’ time at university, including academic work, extra-curricular activities, prizes and employability awards, voluntary work and offices held in student union clubs and societies that have been verified by the institution.

There is certainly some real currency in linking the HEAR scheme with the Open Badge project. However, in a brief blog article, Seb Schmoller compares the similar reactions by the Higher Education sector to MOOCs and the proposal to moving scholarly publishing to the Open Access Model (Schmoller, 2013) which were quite hostile.  I see a similar fate befall the open badge project, which is a shame as I see some real value here in terms of lifelong and life-wide learning linked with personal e-portfolios. The challenge is to get government, industry and the Academy see the value in this as well.

Burgess, R. (2012). Bringing it all together: Introducing the HEAR – The final report of the Burgess Implementation Steering Group. London: Universities UK. Available at: http://www.hear.ac.uk/assets/documents/hear/institution-resources/HEAR-Bringing-it-all-together.pdf [Accessed 9.2.2013].

One thought on “Open Badges – A new Open Standard for recognition?”